Skip to content
Back in August, the day after we moved back to California it was my birthday. I have been wanting to make these cupcakes for a while now but I knew I didn’t need to have that many lying around the house. So being back home with family was a great opportunity. Rather than taking the time to make a bunch of cupcakes I made it into one large cake. It was just as tasty and much easier for a family dinner at home. We found this cake tasted much better the 2nd day after the flavors had a chance to meld. This cake is definitely a winner.
To make it as a layer cake I baked the cake in a 9 by 13 pan. After it cooled I cut the cake in half.
I spread the filling on top of one layer, placed the other layer on top and then frosted the whole cake with the cookie dough buttercream frosting. I mixed some chopped bittersweet chocolate into the buttercream frosting. It was a little harder to spread but I really liked having the chunks in it and it was faster than pressing chocolate into the sides.
I sprinkled the top with my leftover chopped bittersweet chocolate. You can’t have too much chocolate right?
I think I need to find a reason to make this cake again because it is a total winner. 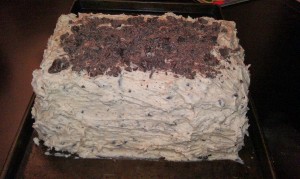